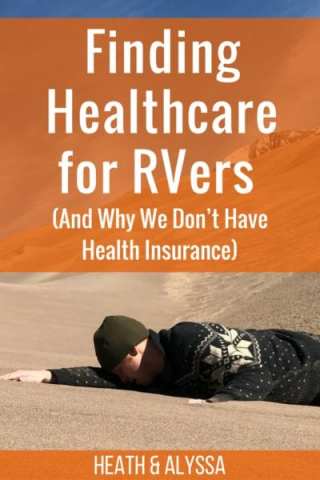 Ah, healthcare. This is probably my least favorite subject to talk about. It invites so much controversy, confusion, and rip-your-hair-out hassle. Not to mention finding healthcare for RVers is ten times more complicated.

We’ve been RVing for three years and have tried quite a few options for coverage on the road. We’ve actually used something different every year because we have not been happy with our options.

When you’re rarely in your home state or domicile state, it’s hard to find healthcare coverage that will take care of you when you’re off exploring Denali National Park.

In this blog post, I’ll talk about our own experience with insurance on the road.

Note: I’m no expert in healthcare for RVers because let’s be real, the rules change too much for anyone to be an expert. This blog post is purely our own experience. If you’re looking for medical advice, you’ve come to the wrong place.

At the time, I was paying $4.87/month for health coverage with Blue Cross Blue Shield. I had a terrible catastrophic plan with a super high deductible.

This was while we filmed Hourly America, which you can watch for free here, and we were making little money our first year on the road (see our total income here). Since our only income was through sponsorship and it took until October before we started finding freelance clients on the road, paying $5 for health insurance was about all we could afford.

Despite making very little our first year on the road, we did not qualify for Affordable Healthcare in 2015. I imagine this was mostly because we are self-employed. Since we didn’t receive any government subsidies and because our business was just getting started, we couldn’t afford health insurance to shell out $200/month or more for health insurance, period.

All of the plans we looked at were over $200 to insure just me. At 24 and self-employed, there was no chance we could swing that.

Choosing to not sign up for healthcare was a huge point of stress for us, but financially it was our only option.

Since we were young and in good health, we felt dropping our coverage wasn’t too big a risk and did our best to not get me pregnant.

We did have to pay the 1% of our income penalty for not having insurance, but this was still significantly less than how much it would’ve cost to insure me for the year.

In 2016 we signed up for my health insurance through RVers Insurance Exchange.

We found RVerinsurance.com through the recommendation of Cherie and Chris over at Technomadia.

Signing up with RVer Insurance was a little complicated and confusing, but offered a lot of peace of mind since they specialize in finding health insurance coverage for RVers and up until this point, we were researching health plans ourselves.

We called and talked to Colleen, explained our situation, and told her what we were looking for. We filled out some forms—which we had to print out, fill out by hand, and then fax back to them like it’s 1987—and she called us back the next day with multiple options.

Colleen found me a plan that would cover me across all of America with Scott and White Health Plan. It was a whopping $265 a month for just me. Talk about a kick to the gut. And that was the cheapest plan available for me.

I argued with Heath that we couldn’t afford that, however, he (and everyone who knew I wasn’t covered in 2015) insisted that I get healthcare in 2016, so I did. Never used it once, but paid a pretty penny for it.

If you’re looking for traditional health insurance, I highly recommend going through the agents at RVer Insurance so you can be sure you’re finding a plan that will allow you to access healthcare wherever you are traveling. They also offer a lot of options for telemedicine, which can be a great option if you can’t find a provider in your area and they even offer some healthsharing plans as well.

In 2017 we signed up for Liberty Healthshare as our healthcare provider.

If you haven’t heard of healthsharing, let me explain what it is.

“A health care sharing ministry is an organization that facilitates the sharing of health care costs among individual members, in the United States, who have common ethical or religious beliefs.” (Wikipedia)

If your first thought is “Huh?” let me put it layman’s terms. Instead of paying an insurance company each month, you pay other people’s medical bills. And when you make a claim, instead of insurance paying the claim, other people in your healthsharing community pay for your bills.

This means a few things:

I would’ve been skeptical about joining a healthshare ministry, but before signing up we talked to several people who have used healthsharing and raved about it (including my parents). My parents, fellow entrepreneurs, joined Samaritan Ministries after the Affordable Healthcare Act passed, making traditional healthcare unaffordable for them. This is a pain point for many of our self-employed friends. My family has claimed several procedures and doctors visits over the years and have had nothing but good things to say.

We would’ve joined Samaritan years ago, however, you are required to have a pastor’s signature and sign a statement of faith. It’s hard to have a “home church” when you’re never in a place longer than a month, so we were unable to join. (Remember the foundation of healthsharing is that you share medical costs with a group of individuals with common ethical or religious beliefs.)

So we chose Liberty Healthshare (on the recommendation of Michelle from Making Sense of Cents). Liberty is religiously affiliated like all healthsharing organizations but does not require you to be religious.

Liberty Healthshare has an affiliate program (you earn $100 for every person you refer) so I tweeted at Michelle and she sent Liberty my phone number and email address.

They called me (the call was less than three minutes), emailed over a few forms I could fill out online, and we were done!

100% of eligible medicals bills will be covered, up to $1,000,00o. Since our average spend on doctor visits in our marriage were exactly $0, we figured that sounded like a pretty good deal.

We were assured that not only would everything pregnancy-related be covered, but that we would be repaid for all medical costs within 30 days. Yep, we would pay for everything out of pocket unless we could find a doctor who accepted Liberty already (we couldn’t).

And so we started paying thousands of dollars to my OBGYN (at the self-pay discount) and submitting them to Liberty, but we weren’t getting any checks in the mail. Then 2019 hit and our monthly fees were raised as well as our AUA (annual unshared amount, which basically means deductible). Annoying. When we called them on the phone since we hadn’t received any checks yet, they said they reimbursed after 30 business days.

Hm. Okay, weird, but whatever.

Then we called a month later and they said they were months behind, but don’t worry you’ll be reimbursed.

Suddenly I’m nine months pregnant and we haven’t been reimbursed for anything and I’m about to charge a c-section to my credit card. They say on the phone that they are four months behind in payments, but congrats on the baby!

At this point, Heath and I know we need to switch to someone else, but I’m about to have a baby and it’s the middle of the year and I’m pretty sure that is the worst possible time to try to switch health insurance.

And so I end up charging close to $10,000 (again with the self-pay discount) for surgery, anesthesia, pediatrician, hospital stay, etc.

My daughter was born in May and it is now December and we’ve seen $0. Liberty is now saying on the phone that they “have no timeline” on when they will be paying us and that basically they don’t have the money to pay anyone.

We are in a tough spot.

For over a year, we recommended Liberty because we had good experiences with them…because we didn’t actually have any medical bills. Now, I have this horrible feeling in my gut knowing that I could’ve put other people in this same situation where you’re out thousands of dollars and you’re pretty sure you’ll never see a cent of it again. We have it in writing from Liberty that we will be reimbursed even though we are leaving them, but we will see. Maybe we will be reimbursed before Ellie graduates high school.

If you use Liberty Healthshare currently, I would recommend switching.

If you signed up for Liberty because we recommended it to you in the past, I am so sorry for recommending them to you.

If you want to hear more about other full-timers’ experiences with health insurance, here are a few more articles to read:

Now if you’re not American, you have much better options (or if you are American but want to RV abroad like we love to do!).

Finding coverage across the globe from an insurance company you can trust is extremely difficult right now, but I think (I hope!) that we just found an awesome solution in a company called Safety Wing.

With a tagline of “Insurance for nomads, by nomads” Safety Wing was created by travelers who understand how much it truly sucks to find health insurance that works. Here’s their mission:

People who are location independent fall between the cracks, without proper access to insurance or national safety nets. We know this because we are nomads ourselves.

To solve this, we are building a global social safety net tailored to the needs of online freelancers, entrepreneurs and remote companies. We’re starting with travel + medical, then adding comprehensive health insurance to our offering before moving on to disability and pension.

We will keep adding products until we have a complete social safety net – fully functioning across borders.

The main difference between SafetyWing Nomad Insurance and Remote Health for individuals:

Right now, Remote Health is the best option we’ve seen for global RV entrepreneurs like ourselves. They also have a remote health for businesses option, so if you’re running a company with employees and want to offer healthcare as an employee benefit, they have affordable options for that too.

Now like I said, we have been burned before from other health insurance companies (I think everyone has at this point) so I’m not going to say with 100% confidence that this is the best insurance possible and you will be endlessly happy and healthy for choosing it. But I do think it’s one of the top options out there for digital nomads right now.

You may have more questions than answers after reading this post (that’s healthcare for ya), but I hope our experiences have shed some light and shown you some options. For Americans, RVerinsurance is a great place to start looking for coverage. For anyone abroad, Safety Wing has great options.