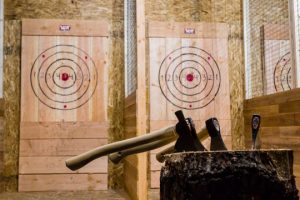 Axes have been thrown since the dawn of civilization, up until the modern ages in war. A war technique employed mostly by foot soldiers and sometimes by mounted cavalry, axe throwing in war is obsolete now.  That does not mean it has gone the way of the dinosaur.

Axe throwing has been played as a part of timber sports for some time now. But its popularity among the youth can be traced back to the inauguration of ‘Backyard Axe Throwing League’ in 2006.

Gradually, axe-throwing bars have opened up in the United States, Canada, Australia, New Zealand, and even Thailand. These offer a unique leisure activity one can perform with friends or even family. Various new axe-throwing companies have cropped up in these countries to cater to the growing interest. An axe throwing company provides arenas to practice axe throwing for a fee.

Axe-throwing has two major stances in which you can throw the axe. 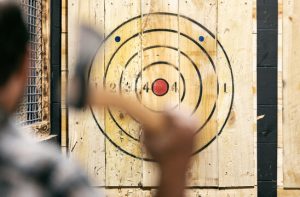 Axe throwing is a sport played with a weapon. Thus, the possibility of it injuring or even killing a person is always present. The casualty could either be the player or a bystander. Nobody is ever allowed to stand behind the target, as there is always a high possibility of the thrower missing the target.

Also, the other participants should stand at a safe distance from the thrower and the target. The path between the throwing line and the target board should also be cordoned off. The handle of the axe should be properly checked before the throw to ensure it does not come off during the throw. A first-aid kit should be readily available in case of an injury.

Axe Throwing is not just a sport intended for recreation. If done properly, the practice of axe throwing could be a useful exercise. Let us take a look at the possible benefits of the sport of axe throwing.

It is a bigger, badder version of darts. As opposed to darts, here you get the added thrill of throwing a heavy weapon, which lands with a thud and takes more muscle to propel through the air.

Throwing an axe can be a great stress-reliever, as the activity demands physical stress and mental attention (plus it’s really fun!).

Throwing an axe is a great workout for our core. Throwing an axe requires our core to hold us in position while the momentum of the axe tries to take us forward.

Throwing axes can help us get stronger shoulders. Whether it be a one-handed or two-handed throw, the motion of bringing the axe forward engages our shoulders, our arms, and our lats.

Throwing an axe can be a great activity to bond with your friends or even your loved ones. A competitive environment brings out the best in us and helps us release our stress. Axe-throwing team building is coming into vogue nowadays.

Axe Throwing is rapidly becoming all the rage. More and more youth are exploring the sport in their spare time. Rather than spend time lying on the couch on the weekend, it is better to visit an axe-throwing bar and engage in something that strengthens the body and heals the mind.

Like every other new activity we perform, axe throwing helps broaden our perspective and helps us know more about ourselves. But proper safety measures must be followed, and an alert mind must be kept while performing axe throwing. After all, the axe is a deadly weapon wielded by our forefathers and should never be taken lightly.